Home » Things to do » Downtown Houston

Hi, this is Sunni! My family has lived in the Houston area for more than 7 years, and yet there is still sooo much left for us to explore!!! So naturally on my birthday- the day that I can request to do whatever I want, and no one is allowed to grumble- I had a list of "experiences" that I wanted to squeeze into the day.
This included: The Breakfast Klub, riding the Metro, checking out the Observation Deck in The Chase Tower AND the Observation Deck in Wells Fargo Plaza, walking the tunnels, "Burping the Bayou", seeing the children's room of the Julia Ideson Building, riding the Greenlink Shuttle, trying out The Listening Vessels at Discovery Green and watching the bats emerge from the Waugh Bridge. It was a long day : )
So here's how the day went.... We drove by the Breakfast Klub around 11am and realized that we were NOT up to wait in the line that was out of the door and wrapped around the side of the building! We have actually gone before and their Chicken and Waffles really are that good, but we were a group of 4 adults and 3 kids with a day full of activities ahead of us. 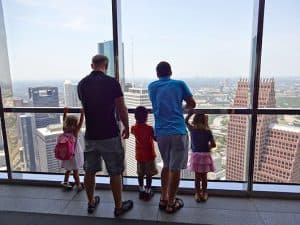 I decided we needed to pick another place asap, so instead we went to Natachees which is super close. It turned out to be a better choice- the kids were delighted to have their meals served in a lunch tin, they got to play in the sand box for a little, and the parking lot was a great spot to leave our car for the day ($3) and when we were done, we were able to catch the Metro easily ($1.25/rider ages 5 and up).
We got off the Metro at the Preston Street Station and walked a couple of blocks over to the Chase Tower. The elevator ride alone was entertaining to the kids, but to see the city from the Observation Deck on the 60th floor really was cool.
From there we walked over to the Preston Bridge to find that mysterious red button. Everyone pushed the button- but 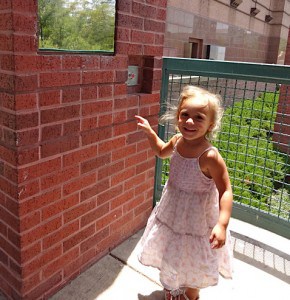 somehow not everyone saw the big "burp" so we'll have to do this one again. On the bright side- it's still mysterious! From there we trekked back over to the Chase Tower so that we could access the tunnels.
Now by this point we were all super sweaty, so the first thing we did when we were below was to have ICEEs while we enjoyed the AC. Walking through the tunnels to our next destination, The Wells Fargo Plaza, was soooo much better than walking outside in the heat! Once we got to the Wells Fargo Plaza we found out that the Observation Deck was closed. Oh well- you've just got to chalk some things up to being part of the experience!
We walked to the Julia Ideson building which was pretty much next door, and once we were inside we were redirected to the Central Library in the adjacent building. I really did mean to check out the children's room/library in the Julia Ideson building, but in the misunderstanding we just went with it! As it turned out, the Central Library was a nice stop for us. We read books, took a 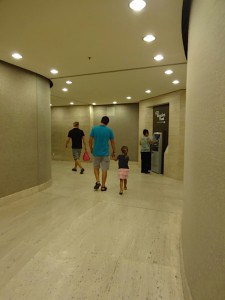 potty break and checked out the art display on the ground floor before continuing on with our adventure.
Next we caught the free Greenlink Shuttle over to Discovery Green. We got off the shuttle at the perfect spot, right by the Listening Vessels. The kids got a kick out of it- well Ella missed this completely since she had fallen asleep!!! We got some drinks from the café and relaxed while we let the kids play in the splash pad (luckily we brought swim suits along.)  There was a Kona Ice Truck parked right next to the splash pad, which elicited squeals from my 3 year old - PLEASE can I have some?!?! Well of course : )
While the kids continued to enjoy the splash pad, my hubby and brother-in-law caught a cab back to Natachee's to pick up the car so that we wouldn't all have to trek back to the car with the kids. There is a "Six in the City" $6 fare that cabs have to honor, but we were actually not in the perimeters for the deal so catching the Metro would have been a better way for them to get back to the car. Anyway, once they got back they were able to park right by the splash pad so it was super easy getting the kids loaded back into the 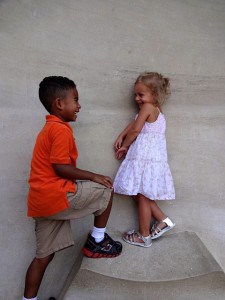 car. And since it was after 6, parking was free!
Back in the car, we decided to have dinner at Pad Thai Restaurant, a place we are familiar with and always enjoy. It's casual and the servers are friendly- it's nice to be welcomed with a smile, isn't it? But our next stop- The Waugh Bridge- was something we were completely unfamiliar with. We had read somewhere to park at Spotts Park, and so we did. From there we didn't really know where to go..... so we walked in the wrong direction and ultimately saw the bats emerge from a distance. So the Waugh Bridge remains on the "to-do" list! After that, we were exhausted and ready to head home!
It was a fun birthday! I have to thank  Big Kid Small City for the inspiration, and my husband for being up for the adventure.... and putting up with the me! : )