Home » Blog Archives » More Lessons Learned by Garbage Man Joe, Age 4 - If You Don't Work, You Don't Get Paid. And You Miss Out on M&Ms. 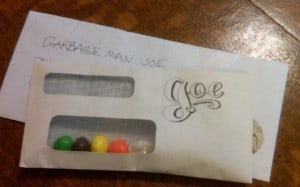 Two months ago, Joe, age 4, started his own little Garbage Can Curbside Service. For details, go HERE. In short, he asked our neighbors if he could roll out, and then back in, their garbage cans on trash day. In return, they would pay him 25¢ each week.

Since it started, Joe has learned many LESSONS. Last time it was, there are 4 quarters in a dollar. This week Joe learned that if you do not do the work, you do not get paid.

After a long day of playing, Joe was certain that he did NOT want to roll back in the trash cans today. In his defense, it had been reported that he had been  falling asleep while swinging at the park. But still, our neighbors were counting on us and sometimes you have to work when you are tired.

Knowing full well that there was money waiting on us, I took off to do the job myself. I pulled in a couple cans and came home with two envelopes.

I showed Joe the money I had earned. I'm not sure my tired boy was very worried about the quarters, but when he saw my envelop of M&Ms, he quickly recognized his mistake.

We made a deal that if he finished taking in the recycle cans, he could have the envelopes. He did this quickly and claimed his prize. (And soon after that, he fell asleep.)