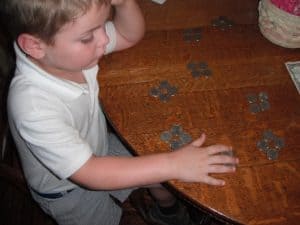 Seven weeks ago, Joe, age 4, started his own little Garbage Can Curbside Service. For details, go HERE. In short, he asked our neighbors if he could roll out, and then back in, their garbage cans on trash day. In return, they would pay him 25¢ each week.

Since then, the business has grown to include other houses on the street and Joe has learned many LESSONS.

After doing his job this week, and collecting his money, he was wondering how much money he had in his jar. To find out, I had him sort the quarters into piles of 4 and count the piles or "dollars". It was a simple task, but this is what he learned:

1. Four quarters are worth the same as 1 dollar.

2. Once you sort your quarters, you can count by "4s" to know the number of quarters.

3. If you have $9.50, you can probably buy a little Lego set. But, if you keep on collecting quarters, you can buy a big LEGO City Fire Truck

4. If you earned the money, you are in charge of it. You get to decide if you spend it on little things or big things.

Guess what my 4 year old decided? He's going keep saving for a really cool Lego set. And he's excited that he's in charge of what he can buy.