My husband and I both work at the computer all day long. When Joe asked us why, my first answer was to tell him we were making money. I could see the gears turning in his brain, wondering how we were printing money while sitting at our desks.

I explained a little bit more about my job, but quickly realized I would need to show him that when people advertise their skills, get hired and do a good job, they get paid money for their efforts.

Not too long afterwards, I  saw an article in Family Fun Magazine about a family who was looking for a first job for their son and came up with a garbage can service. The boy, age 7 or 8, was rolling out trash cans and pulling them back each week for 25¢/house. I talked it over with Joe and we decided that this would be the perfect job.

Over the course of a week, we talked about how we would start his business and advertise his services. We also talked about how once you start a job and people depend on you, you need to reliably do your job, even when it's not convenient.  Joe did not shy away, and my husband and I were willing to commit our own time, so we decided to move forward. 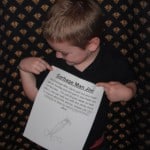 Joe helped to create his flyer. He drew the trash can and I helped him type the text. Starting small, we printed out 4 flyers and headed to our neighbor's houses. We left the flyers in the mailboxes and soon had our first customers. Joe spoke to each of the neighbors himself to understand where they wanted their trash cans and when he could pull them in and out each week.

Soon it was trash day and Joe and I headed out to do our new job. Joe felt very important pulling out the trash cans and was ecstatic when he received his first quarter.

Each week he has been placing his quarters in a jar. We've been counting them and talking about what 4 quarters can buy and 8 quarters and so on.

A good lesson came this week as the ice cream man pedaled down the street. Joe was desperate for an ice cream bar but we told him we did not have the money. He insisted that he had "money" and pulled out 4 quarters. When we explained that ice cream cost 6 quarters, he quickly understood why we could not buy the ice cream. At first he insisted that he would get ice cream the next week, but I suggested that he save his quarters until he had 12, he could share ice cream with his friend. And just like that, he had a goal and was determined to save 12 quarters.

We are about a month into our  job and all is well. Joe is learning valuable lessons and the time commitment is not a burden for his partners (aka his parents). As time goes on, we'll keep you updated on the adventures of Garbage Man Joe!