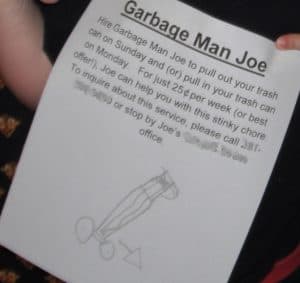 Joe recently started his own little Garbage Can Curbside Service. For details, go HERE. In short, he asked our neighbors if he could roll out, and then back in, their garbage cans on trash day. In return, they would pay him 25 cents each week.

1. Sorry, you can't quit.  On Sunday night we headed out to roll out the trash cans for the week. At the first house, my tired boy managed to bump his head on the trash can. It was the worst thing that had ever happened to him and he said he was done pulling out trash cans. I reminded him that if you have a job, and people are depending on you, you cannot just quit when things get tough. I assured him that I do not always want to go to work, but since I agreed to do the work, I had to go. I then dragged him to all of the houses and made him pull out each trash can. And it took forever. And I would have preferred to have sent him home. But that would not have been a very good lesson.

2. If you do good work, you get rewarded.  Apparently the neighbors did not see the trash-can-head-bump-drama, because as we walked down the street on Monday, two neighbors came out to hire Joe. Word had gotten around the neighborhood and these families were excited to have Joe take care of this chore.

3. It takes 12 quarters to buy ice cream.  Last week Joe set a goal (without knowing it was a goal) to save 12 quarters so he could buy ice cream from the ice cream man. Since it is warm out today, Joe decided that he really needed to get ice cream. His sister was playing with him, so he needed enough money to buy two bars. He counted out his quarters, and he had enough! I pointed out that he would only have 3 quarters left in his jar, so he would need to do a lot more work before he could buy more ice cream. He was okay with it, so he got his ice cream. If the ice cream man rides by again tomorrow, and we don't have enough money, we'll have the opportunity to talk about saving up a rainy day fund!