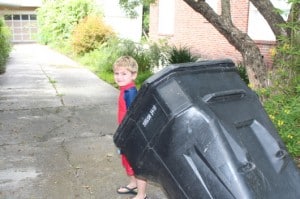 Last February, Joe started his own little Garbage Can Curbside Service. For details, go HERE. In short, he asked our neighbors if he could roll out, and then back in, their garbage cans on trash day. In return, they would pay him 25¢ each week.

Joe went from excited about the job, to bored, to wanting to quit, to thinking it was a good job and a good routine.  There was nothing special that we did along the way except to not let him quit.

There were many weeks when we forced him to go house to house to fulfill his responsibility. He complained and complained, but we reminded him that he had wanted the job and that people were counting on him.  Then, suddenly, one week he decided that it was not that hard and just did it. Now he's reminding us when it's trash day.

Joe has also seen the reward that comes with not quitting. One is recognition and another is money.

A couple of weeks ago a neighbor's grandkids were visiting and Joe looks up to the 8 year old boy. On trash day, Joe found out that the boy wanted to help, to learn more about how the job works. We invited him to come to work with Joe. This big boy loved Joe's job and was super excited to roll out trash cans. You can bet that this made our 5 year old beam with pride. 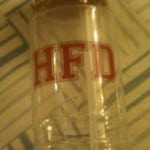 The other reward is money. Joe has been collecting quarters for many months. He has spent a few on snacks and ice cream, but he has mostly saved them. This week he decided to take a portion of the money he has earned to the Houston Fire Museum. Here if found a fabulous HFD water bottle for approximately $9.00. Joe make 9 piles of 4 quarters and paid for his own bottle. This also made him beam with pride.

I want my kids to be reliable and I don't want them to quit when things seem hard. I also want them to understand money, what it's worth and  how to spend it wisely. The little neighborhood job is teaching all of this without much help from me.