In February 2012, Joe started his own little Garbage Can Curbside Service. He asked our neighbors if he could roll out, and then back in, their garbage cans on trash day. In return, they would pay him 25¢ each week. 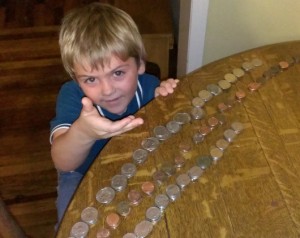 Over the last year and a half, Joe has learned a great deal about self-reliance, independence, responsibility, entrepreneurship and the value of a dollar. We have allowed Joe to make his own decisions and get the feel of money and starting a business. You can get the free download HERE on the benefits we've seen from Joe starting a small business and how to start your own.

As stated in this booklet, it is our opinion that a childhood business is not started to save money. It is started to reveal human behavior in regards to money and opportunity. Once experienced, the child can know what behavior works and self-correct what does not work. And this has been effective for us.

To keep growing and learning, the next phase for Joe the Garbage Man is to learn about saving and giving money.

Since Joe's TV appearances, we have been fortunate to be in contact with several successful entrepreneurs and business owners. Their guidance for Joe has been to divide his money 3 ways:  Spending Fund, Giving Fund & Wealth Fund. 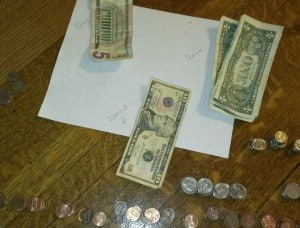 These lessons from mentors have made an impression on Joe, so moving forward, this is what he has decided to do. When he counted his money this week, he had $50. He put $5 in a wealth envelope, $5 in a give envelope and $40, of mostly quarters, in a spend baggie.

. The $5 is headed to support soldiers through the USO and other $5 is locked away, and out of mind, for now.

We will keep you updated on how this goes moving forward. At this point, it looks like Joe's parents will soon be the ones learning lessons from Joe the Garbage Man and his mentors.

Stay tuned because we'll soon have posts about invoices, raises and influence.