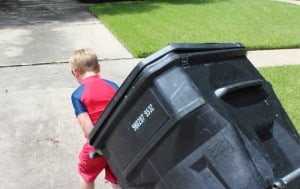 This article was provided by Joseph Eitel of Hometown Dumpster Rental of Houston.

Can one person really make a difference? Yes, I think they can.

Waste in America and how you factor in.

You've probably seen these statistics before, but the numbers are still alarming enough to rattle your teeth. The U.S. generates about 250 million tons of waste each year (EPA, 2011). Less than 35% of this waste is recycled. That’s pretty poor if you ask me considering modern mass recycling technology has been around for decades in America.

So, how can one person make a difference when we’re dealing with millions of tons of garbage? It seems a bit overwhelming, but let’s break it down a bit.

The average American generates about 4.4 lbs. of trash per day – more than 1600 lbs. per year. Can you imagine if you were to spend the next 365 days tossing all of your trash into a nearby lake or stream? Would that have an impact? You better believe it!

Making a concerted effort to recycle, reuse and compost waste can potentially reduce the amount of garbage you generate by more than 75%. Many items people toss in the trashcan should instead be going in the recycle or compost bins. This includes things like:

This is just a short list of items that are recyclable and/or compostable. It’s easy to see how you can really make a dent in reducing your impact on the waste stream by amping up your recycling and composting efforts.

What’s cool is that you’ll begin taking pride in the fact your curbside trash cart is only half full – rather than overflowing onto the ground – each week when you wheel it out to the curb.

Kids are naturally conscientious and observant. Children watch their parents and ultimately will follow their lead.

Involve your kids in your household’s quest to reduce waste output. They’ll be very receptive to the idea, and it will help lay the groundwork for a more sustainable way of living in their life as they get older and fly away from the nest.

Some kids take these type of life lessons from their parents and ride with it. Garbage Man Joe is the perfect example. He’s able to combine the knowledge and guidance instilled in him from his parents, along with his strong initiative that’s obviously embedded in his genes, to form his own waste removal business by the ripe age of four.

Garbage Man Joe is learning about responsibility and the value of a dollar, among other life lessons. It’s a priceless education that you really don’t get in school.

How it all ties in

Garbage Man Joe has influenced many children his age, not to mention adults in need of some motivation and inspiration. If he can do, so can I!

Joe is just one person, but through his hard work and help from his parents, news media and the Internet, has really made a positive impact in his community and beyond.

The same is true for anyone who decides to live a more eco-friendly lifestyle by recycling, composting and reducing waste. One person can make a big difference in reducing our impact on the environment. It all starts with you.

Even though the moral of the story here is to reduce the amount of trash shipped off to landfills, we’ll still always have a need for a curbside trash and recycling pickup. So don’t worry Garbage Man Joe, your job security is looking good!