This week the kids and I went on our biggest adventure yet. We flew from Texas to New York. With three kids, all under five, and one adult. It all went very smoothly and I survived to tell the funniest of the travel stories.

When we arrived at security in Houston, the man who looked at our tickets asked if I was the only adult in the group. I said yes and he said he would pray for me. We then had to pick between three long lines and chose the middle one. A minute later I looked back and the other lines were a mile long and NO ONE was willing to go behind me. I joked about it with a very nice mom who came behind me to help us through security. And, I'd like to point out, it wasn't even us who help up the security line with a bag check. Those other travels bet on the wrong line! 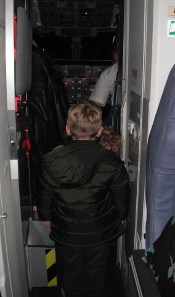 The rest of our day was filled with nice strangers who helped us along on our cross country adventure. A grandma on the first plane jumped up to help as soon as she saw us come in. Flight attendants took the kids to see the pilots without me asking. A young man offered to wheel my bag the million miles through the airport. 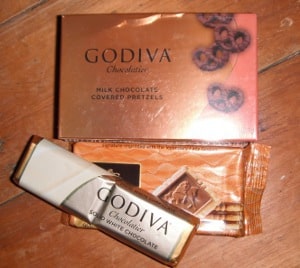 My favorite story of kindness is of the grandfather in Cleveland. We stopped to pick up a sandwich and the kids were playing nicely. This grandfather saw us and commented that I had my hands full (in a nice way). We waited and waited for the sandwich, and when we were about to leave for the gate, this grandfather came back with a bag from next door. He gave it to me and told me to enjoy it quietly, by myself, when I got to where ever I was going. It was full of Godiva chocolates. I'm guessing this is the same gentleman who anonymously paid the check for the Army man in the restaurant. I think we both plan to pass along this kindness. 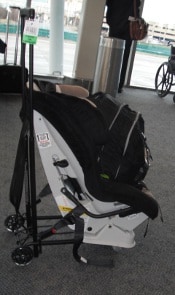 Let me also share a couple of travel tips. One practical, one funny. Before this trip I bought the Britex car seat travel cart and was able to pull one kid through the airport without a stroller. It was very handy and I highly recommend it.

When I got the cart to our first plane, I just picked up the car seat, popped it on the airplane seat, tightened the buckle and was done. Brooke was then safe (uhh, trapped) in her chair and quickly fell asleep. It was after the flight, when I tried to undo it that I found the problem. 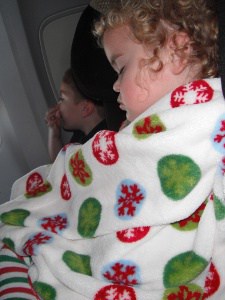 I had been able to buckle the seat, but if you remember, airplane seat belt latches must be flipped up to release. Once inside my carseat, there was no room to flip it up. Many people tried to remove it, but it was stuck stuck stuck. Finally maintenance was called. After ripping off the plane seat cushions they were able to get enough slack in the belt to undo the latch.

When I got off the plane 10 minutes after everyone else, the crowd waiting to get on the plane looked at me with funny smiles and I think they were trying not to laugh. Don't worry, I was trying not to laugh too because at this moment I remembered my sister telling me to be sure to use the seatbelt extender.

My very favorite part of the adventure was on second flight. It was on a little puddle jumper propeller plane. We had to go outside and walk up the stairs to the plane (which was so cool according to my kids). Once we took off on our hour flight, we had terrible white knuckle turbulence. I was a little worried about how my kids would react, but I looked over and they started laughing hysterically and said, "We're astronauts!". And so now we know the Big Kid travelers love turbulence. 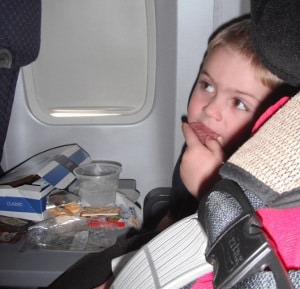 It was a long day of traveling, but it was a great adventure. Joe says his favorite part was eating on the airplane on the little meal tray. Brooke just repeats what Joe says. The next day when we woke up, Joe asked if he could be a pilot instead of a fireman that day. Brooke too.