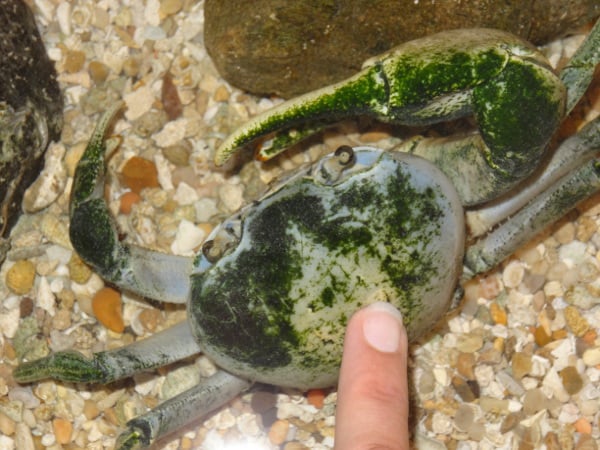 This week we traveled south down 288 to visit Sea Center Texas. Texas Parks and Wildlife Department operates three fish hatcheries, but Sea Center Texas is the only one visitors are allowed to tour! We reserved our tour spot by calling the number on this page.

We arrived at the Sea Center about 45 minutes before our tour and were able to go through the visitor center during that time. The first things that grabbed our attention were the large stuffed fish hanging on the walls. Those things are huge! Each has a nameplate beside it, so we were able to identify them. I didn’t need to read the plate to know what the hammerhead shark was, but I didn’t know how massive they were! 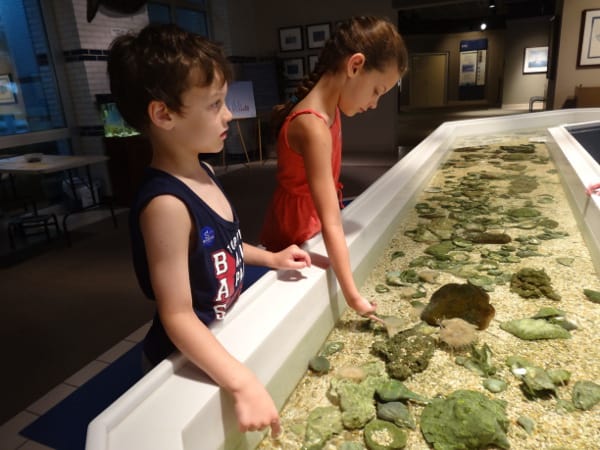 Immediately after that the kids had to go check out the touch tank. Here they were able to touch live hermit crabs, anemones, and a few other kinds of crabs! There were even small fish flitting around in the water and a volunteer was available to answer any questions we had about the animals in the tank. This was definitely our favorite part of the visitor center.

Across the room from the touch tank was an area where the kids could make rubbings of eight different sea creatures. The plastic forms had raised ridges, so the kids were able to place sheets of paper over them and rub crayons along the paper to create the impression. 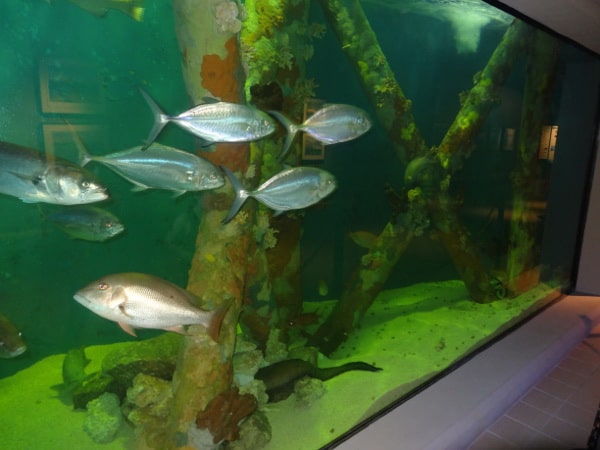 Next we saw several large aquariums. Each of the salt water aquariums features animals that can be found in the Gulf of Mexico. Among other things we saw a sting ray, chocolate chip sea star, Dory and Nemo (blue tang and clownfish), red drum, gray snapper, a nurse shark, and the state record moray eel!

After that it was time for our tour of the hatchery. We learned that several species had been seriously over fished before limits were set, so the Dow Chemical Company, the Coastal Conservation Association, and the U.S. Fish and Wildlife Service teamed up to help replenish them. The fish being hatched at the Sea Center are Red Drum and Spotted Seatrout. 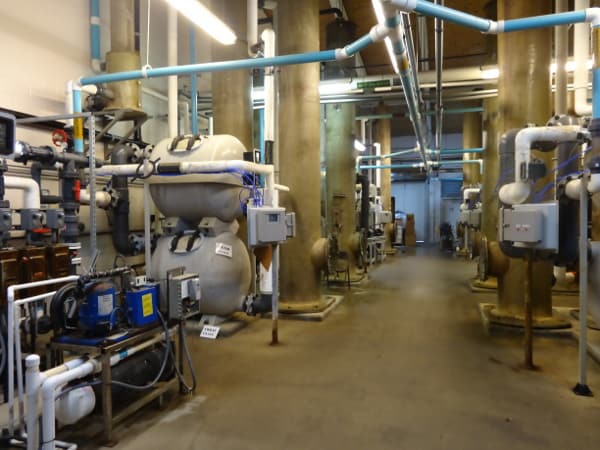 The first room we entered is where the mature breeding stock is kept. These are wild fish that are kept in tanks to breed then released back into the wild. The male to female ratio in the tanks varies by species, but there are only a few fish in each tank. After the female lays the eggs the fertilized ones float to the surface where they are collected while the unfertilized ones sink to the bottom. 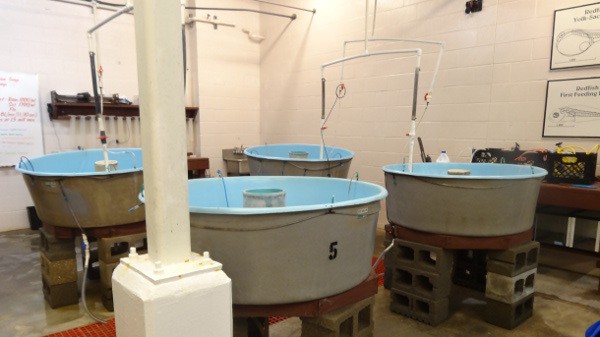 The Sea Center likes to keep track of how many eggs there are, but they are so tiny that instead of being counted they have to be measured by volume. There are 1000 Red Drum eggs per milliliter and 1700 Spotted Seatrout eggs per milliliter!

In just a few days the fish progress through the stages from egg to larva to fry, and we got to see the tanks where they are kept during this time. At first it seemed like the water in the tank was very cloudy, but it was really thousands of tiny little fish!

Once the fish reach the fry stage they are transferred to outdoor salt water ponds until they reach fingerling size, which is about the size of a finger. The fish are then released back into the wild at coastal sites that have been carefully evaluated.

Although there are no guarantees the fish will make it to maturity, they have been given a great start. While there is a 99% mortality rate in nature, there is a 70% survival rate at the Sea Center!

Unfortunately the outside portion of our tour was cut short by rain, so we didn’t get to see much of the outside facilities. We also got just a quick glimpse of the boardwalk and wetland exhibit that is part of the Sea Center. 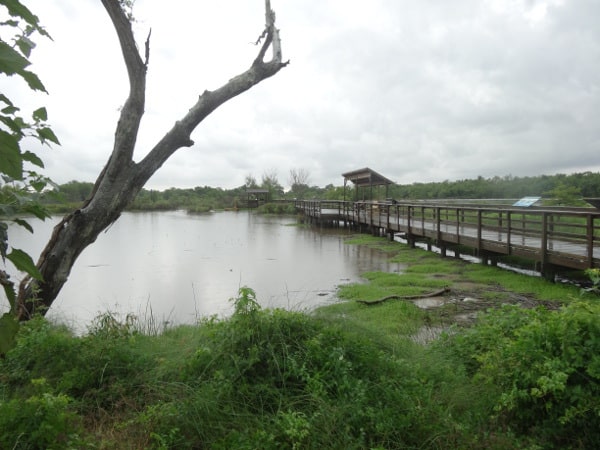 While I wouldn’t make a special trip just to the visitor center of Sea Center Texas, it was interesting to see the hatchery. The Sea Center also happens to be on the way to the beach at Surfside! We had planned to visit the Sea Center in the morning, have a picnic lunch, then drive the additional 20 minutes to the beach. Unfortunately the weather didn’t cooperate and we had to go home instead. 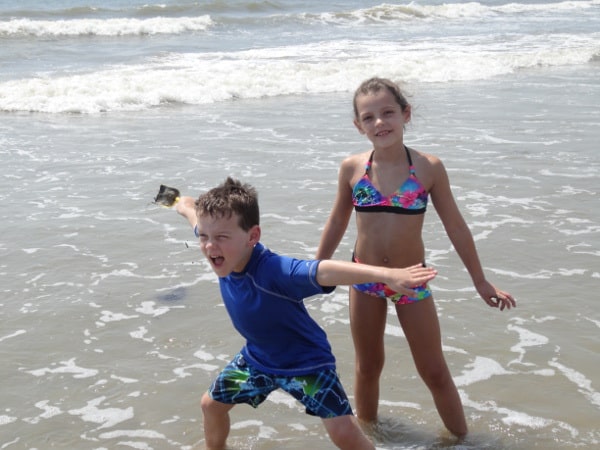 We did go to Surfside last summer though, and it was much less crowded than Galveston. If you go to the area on the map below and look on the right for the public beach access signs, you can even park right on the beach!

Unlike in Galveston, there are only a few restaurants near the beach (none that I know of in walking distance from the public access beaches) and I haven’t tried any of them so can’t give you any recommendations. Also, there are sometimes portable toilets on the beach, but I can’t promise that they’ll be there, or what condition they will be in, so you may want to take advantage of the facilities at the Sea Center before leaving there.

The combination of Sea Center Texas and an afternoon on the beach would have made for a wonderful summer activity, but we did enjoy our time at the Center and I’ve promised the kids we’ll go the beach another day when there aren’t any thunderstorms!