Home » Things to do » Why I decided to embrace PokemonGo! 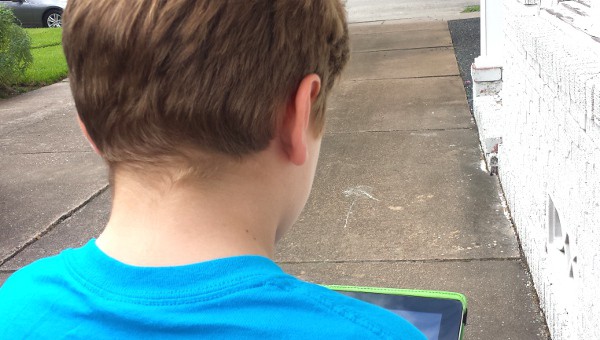 My husband and I have been pretty tough with video games for our (almost) 9-year-old son. We both believe that there is plenty of time for that when he becomes older.

Of course, Minecraft crept into our household, first with guidebooks and then with the game but neither my husband nor I could really figure it out. So our son would play and build and tell us how cool it was when he mined redstone or killed a zombie and we would just nod back approvingly but it was pretty solitary for him.

So when talk of PokemonGo started popping up everywhere, we thought it was fun but nothing more. Then we went to Hermann Park and noticed all the players walking mostly in pairs and staring at their phones and thought how weird that was.

But yesterday, we downloaded the game and started… walking! I didn’t realize how much walking was involved and my son was so excited to go on a walk that I was all in for PokemonGo! This afternoon, our dog and phone in hand, we went around our block where my son found some Pokestops and other monsters he had to catch.

We quickly had to set up some rules: watching the road and not the phone when crossing for instance and trying to stop in the shade not in full sun! But I enjoyed talking with him about our next stop and how far the Gym was. As we were walking around, we met a fellow player who soon started up a conversation with my son.

He was much more experienced than us and we all walked to a Poke Gym to watch him fight and win as we lost our first combat. He showed us tricks and gave us hints. He told us how he goes to popular parks around town and meet other players. We chatted and walked (by then my dog was exhausted!) and I enjoyed seeing my son talking so comfortably with this person who was on his lunch break from work.

The world is in such a weird phase right now and I felt so happy to see the positive aspect of people starting conversations with strangers. I know that there are problems and issues with this video game (all people playing are maybe not quite as nice as our young man!) but right now, I just want to enjoy a nice walk with my son and maybe meet a few nice people from our neighborhood!

Let me know what your experiences have been with the game and who you've run into you somewhere around town!