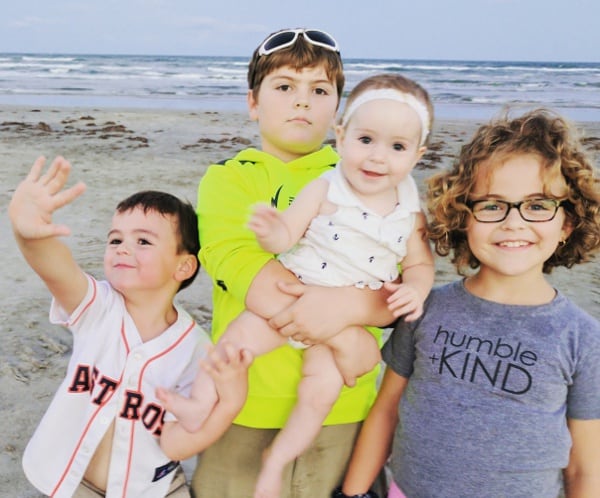 We’ve had an awesome Summer Break with day trips, pool days and park visits… but one of the best things we did was to go to Costco. (I’m not joking.)

During the school year, I go during the day so I do not have to take four kids through the giant store and have my cart loaded with reasonable, but way too many, special requests. That said, over the summer I needed to get some items from Costco and I needed to take care of my kids… so off we all went.

A year ago, this really would have been awful, but this summer it was different. Not only did I get the items on my shopping list, but I saw my big kids grasp money-management without eye rolling or obnoxious sighs.

Last January my husband and I took Freedom Financial Peace University with Dave Ramsey. The first step in the course is to put $1,000 into an emergency fund. Our interpretation was that even if you had $1,000, to see how fast you could add an extra $1,000.

After looking at our income streams and ways to make more money, we decided that the best way to add $1,000 was to just stop spending so much of the money we had. So, we set a grocery budget of $100 per week… and only took $100 in cash to the store.

This exercise was slightly painful, but it was a powerful lesson on how we could better tell our money where to go and how to work for us. So, if we did not get the extra box of Goldfish at Costco, our $10 could go to the travel fund or mortgage fund… and after several months of saving, the savings would be significant. (Not to mention that usually it was more than one extra box being added to the cart.)

So this summer, when I took the kids to Costco, I showed them my grocery list and the $100 in my wallet. As we picked up items, they added up the (rounded) totals and kept us on track. Plus, when we got to the cheddar cheese, they could not believe it was nearly $10. (And I could be making this up, but I think they gained some appreciation for why I freak out anytime it’s left unsealed in the fridge.)

When we got to the end of the list, the kids wanted to add a bottled drink to the cart. A year ago, we would have just thrown it in. I mean, what’s $10 more when you are spending hundreds? But since we only had $100 cash with us and since they were in charge of the sum of everything in the cart, they had a decision to make.

They were determined to get the drink, so they returned the Babybel and had money for the tea. And when we checked out, they were very proud to be right at the $100 mark.

Without a doubt, the trips to Costco were the most useful thing we did all summer. I’ve talked to the kids about budgeting (and not letting the food go bad) but it was a summer at the store that actually made them understand what I was trying to say. (Which is probably because with only $100 in cash, I actually had to do what I was telling them to do.)

Financial Peace University really was life changing for our family. We have always been “good” with money, been frugal and saved when we could… but this course really showed us how to take charge of our money and to fund the things that were important to us.

It also showed us exactly what insurance and investments we needed and what was a waste of money.

And most importantly, it got my husband and I onto the same page as far as our goals and how to accomplish them. I honestly wish we had taken it when we were married 15 years ago.

Another course is coming up in September at Second Baptist Church at several locations. It’s $75/family for all the materials and there is free childcare for kids 5 and under. (My big kids came into the class with us.)

If you are interested in this Bible based approach to financial management, learn all about it HERE. It’s NOT a referral link… I just love what the course has done for our family.

If you cannot attend the class but want to see what it is all about, get the book (affiliate) Dave Ramsey's Complete Guide to Money.