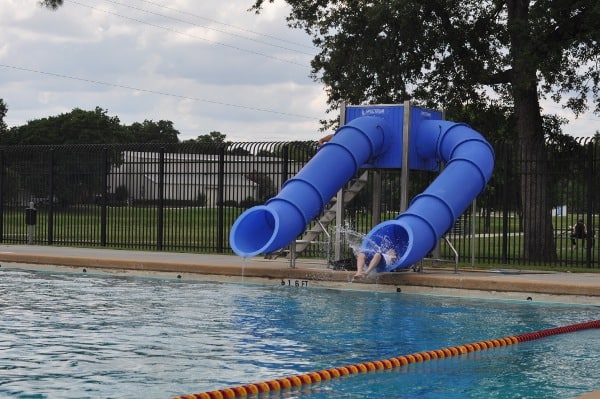 We visited this park on a Monday afternoon... the one day the pool is closed during the summer. We played on the playground... and just HAD to return the next day to swim at the pool. (Pssst... My kids just HAD to go back.) 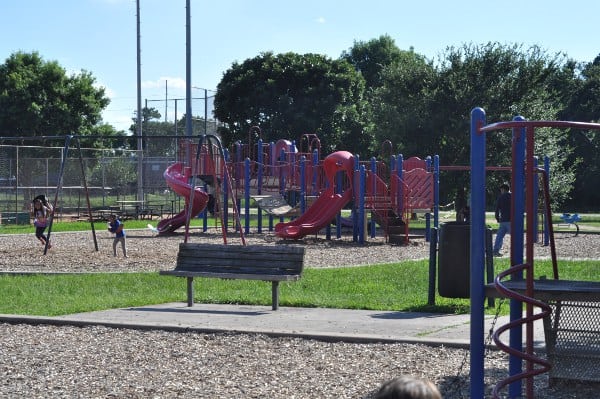 The playground has a small area for toddlers and a bigger spot for big kids. The equipment is older, but includes some cool things like a teeter totter, spring riders, swings and slides.

My kids commented that the bridge on the big playground was cool... which means it was a little dangerous for little kids. (It dips way down and there is a big gap where little ones could slip out... so watch your toddlers... but my big kids liked the challenge.) 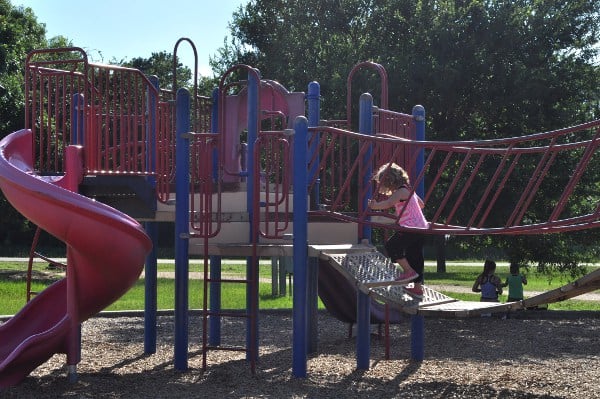 The playground is right next to the parking lot, ball field, fitness park, pool, restrooms and trail. The restrooms were open, but looked a little dark and creepy from the doorway... 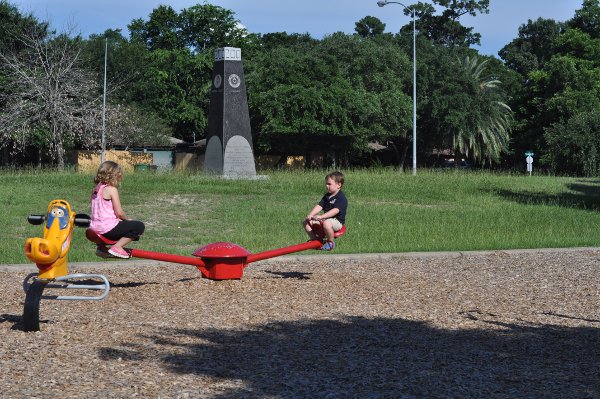 The park has a lot of trees... but the playground and pool are in full sun. So, once you play, you might want to swim. Of course, we had to play, cool off at home... and come back the next day to swim! 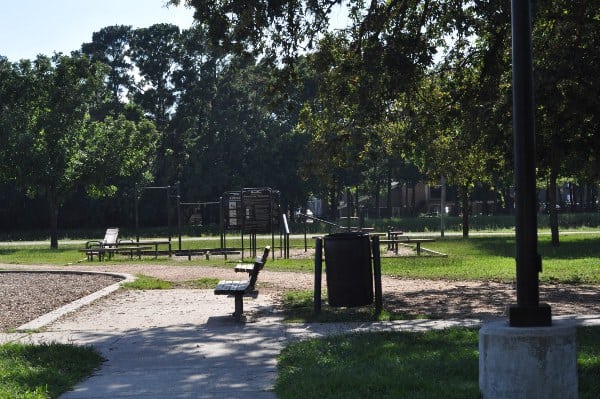 From Memorial Day to Labor Day, the pool is open Tuesday through Sunday. (Find more about the hours HERE.)  The splashpad is in the pool area, so unlike some parks, you can only splash when the pool is open.

When you arrive, you walk in through the gate, sign in your family and head to the water. There are not a whole lot of chairs and not much shade... but I saw the professional pool-goers brought their own chairs. 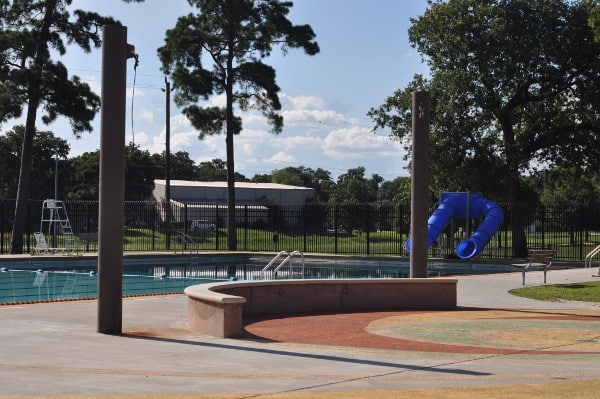 The pool was clean, the lifeguards were watching and all the patrons were having fun. 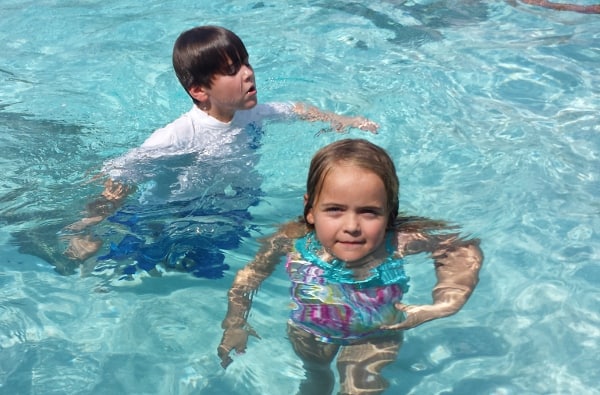 When my oldest son went to use the slide, the lifeguard stopped him and asked him to pass a swimming test. He had to cross the deep end and come back before using the slide. He is a good swimmer, and could do it easily, but I was happy to have the lifeguard stop him. I'd hate to have a weak swimmer fly off the slide and drop into 16 feet of water.

And you do fly off! This short slide must have been fast because my son flew out! 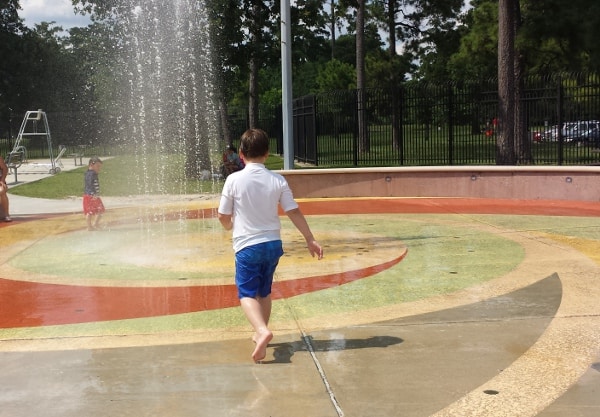 The kids played in the pool, splashed in the little splashpad, cooled off and then we headed out.

A few things to note... the splashpad needed a good power washing. It was well kept but the mat needed a good scrub. Also, it looks like there used to be shade over the splashpad but the canvas was gone. Finally, the side of the pool has the funny little "gutters" like my childhood swimming pool. So, there is the edge of the pool and then a little gutter where the water splashes into and then the pool. No big deal, but you need to be careful not to hit it when jumping in.

But since we did not think we were at some fancy and expensive pool, I did not mind about these things! 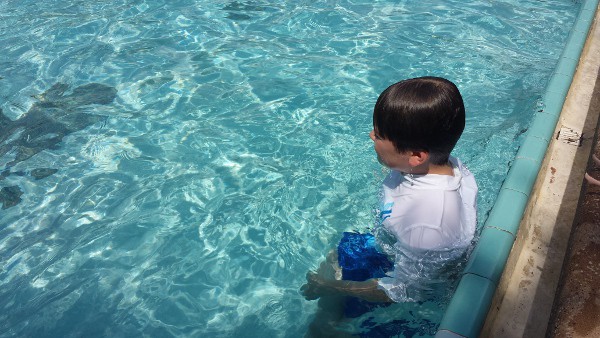 So, we played at the park, returned for the pool and had a lot of fun at TC Jester Park! (And if you want a newer, maybe-less-crowded pool, check out the paid Quillian Pool.) 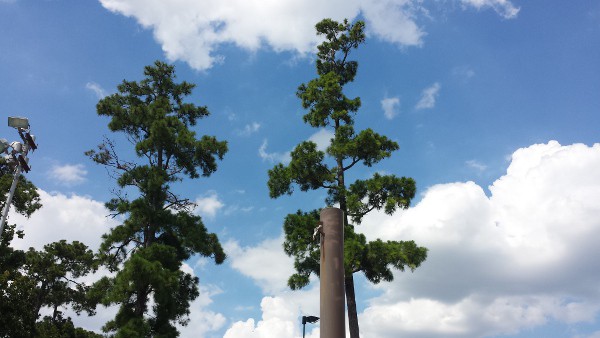 « Six Ping Bakery: Awake Before Much of Chinatown
Where in Houston? Mandell Park at El Pueblito Patio »