My kids and I love to ride METRORail. We frequently ride it downtown for an adventure. But despite Joe's frequent requests, we've never taken the METRO Bus. I've never looked into the bus schedule and have never been brave enough to just jump on. This changed today.

I've been away on business travel and flew to Houston on the red eye flight last night. Arriving at 6:00am, I did not want to ask anyone to pick me up. My plan was to take a cab from IAH to Downtown Houston but the thought of paying a $50 cab fare made me cringe. 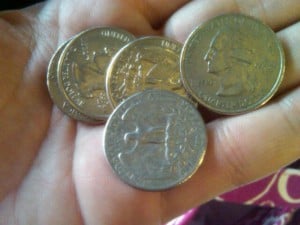 As I was walking out of the airport, in Terminal C, I noticed a sign for METRO. For $1.25 you can ride the all the way from IAH to downtown.  The one catch is, it's an express route, but it's not direct. The 102 line weaves around streets surrounding the airport before jumping on the I45 HOV lane.

Always up for an adventure, I walked outside of the C Terminal, saw the METRO sign and waited about 5 minutes for the next bus to arrive. Check HERE for the schedule. 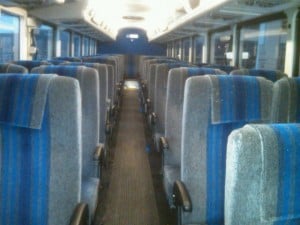 At 6:45am I was the only customer at IAH. I put my roller bag under the bus, my 5 quarters in the slot and took my seat. The driver was very friendly and we headed out.  I saw the route, which circled the airport and Greenspoint before getting on I45, but I had underestimated the number of stops.

From the time I got on the bus, to the time we got on the highway, 30 minutes had passed. (Had I been in a car, it would have been less than 10 minutes.)   Everywhere we stopped, the bus driver knew the passengers and everyone was polite and friendly. It was not a bad experience, I just kept hoping we'd get on the highway with each turn. 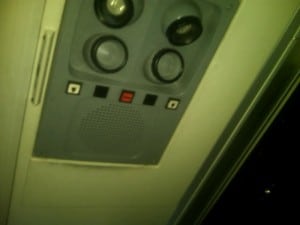 Once we did get on the highway, things moved really fast. We were in the HOV lane and flew past all the other vehicles. After only 20 minutes, we were in Downtown Houston. Here I pressed the red "request stop" button and jumped off near the Downtown Transit Center.

My $1.25 adventure was a success.  The benefit is clearly the cost savings.  A cab would be $50. Driving would be approximately 50 miles round trip, and at 50¢/mile for gas and maintenance, would be $25 in the long term. And parking is on top of this $25. The downside is the time.  The trip took just over an hour, which is maybe 20 minutes longer than driving in a car.

Overall, for $1.25, I'd say this is a really good deal. Just be ready to tour the surface streets before flying down the highway. Go HERE to learn more.