I had read several reviews on the the Insect Lore Butterfly Garden and had been watching the price on Amazon for a while. When a deal popped up on GROUPON, I grabbed it. For $10, I purchased the butterfly garden, with live caterpillars. I schedule the delivery for late August, just before school was to begin.

The kit arrived the week of August 29, and fortunately I was home to rescue the caterpillars from the Houston heat. (The package is labeled as having live insects, so I do think Fed Ex would have found a shady spot for them… still, do you remember how terribly hot August was?)

Our kit had 5 caterpillars, with everything they needed to survive. Within a week, they started to form chrysalides. My kids were really excited about it and we rushed it to preschool to share with our friends. 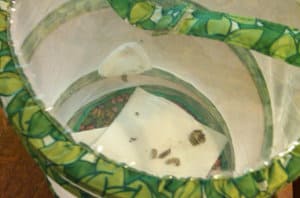 After all caterpillars had formed chrysalides, I carefully moved them from the original jar to the butterfly garden. Only one stayed on the “lid” as the instructions said they would, so I was a little unsure of how successful we would be. (Did I mention we have not had the best luck with little creatures? I had to tell my kids that the poor tadpoles were released into the wild. And that poor guinea pig went to Heaven.) 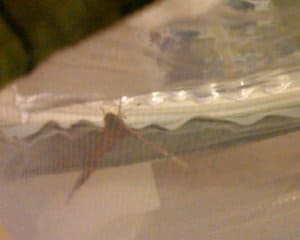 To my surprise, the caterpillars have started to turn into painted lady butterflies. It’s really quite amazing and my4 year old son is  absorbing all the facts I am reading from the paperwork. Did you know that the darker the chrysalid, the closer it is to emergence? And did you know that as a butterfly emerges, it will pump its wings to full size, and they will be full sized and hardened within a couple hours? Joe does now. 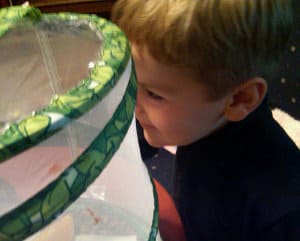 Also, did you know that these guys are quite tough? We’ve transported them back and forth to preschool several times, and had little people being very gentle and just looking with their eyes (I mean just poking the net sometimes). I’m amazed at the butterfly transformation and how successful we have been with the experiment. 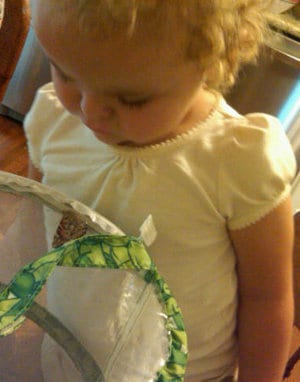 So far we have been feeding our little guys with orange slices and sugar water. Once all butterflies have emerged, we’ll release them outside.