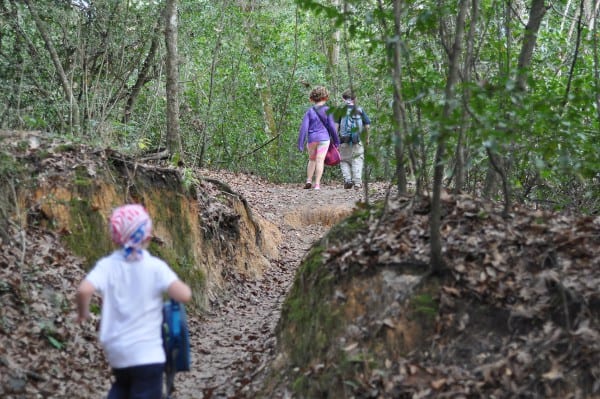 I thought we had checked Buffalo Bayou off the to-do list with Buffalo Bayou Park… but it is really really long… and there are so many trails along it.

A few weeks ago we hiked the Memorial Park Blue Trail… and we LOVED it.  Unlike the wide jogging trail along Memorial Drive, this one follows Buffalo Bayou and goes up and down, through trees and over water on log bridges.

So we headed back to try the Memorial Park Green Ridge Trail.  (See the map below.) 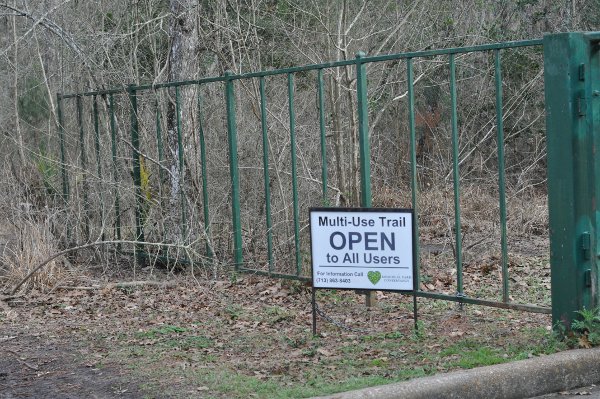 This one starts close to the street and then goes closer to the bayou (but not on the water).  It’s multi-use, so there were some bikes, some hikers… and on the day we went… a whole lot of mud.

We had to tip-toe around several spots, but it was still easy enough for an adventurous 5, 7 and 9 year old… and I could do it with a baby on my chest.  (But a stroller would be tricky here, even without the mud!) 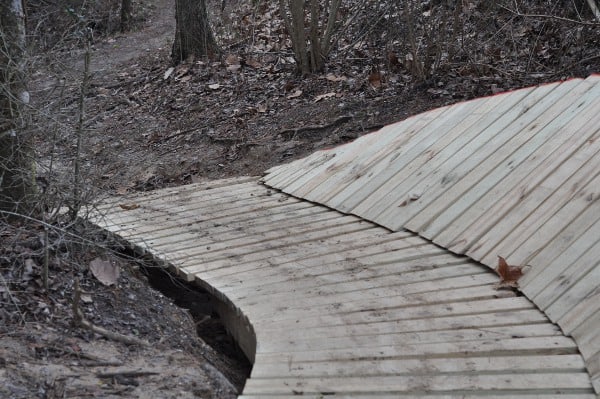 We did a lot of walking, climbing, tip-toe-ing and then we stopped for a little picnic.  (My kids had decided we needed to bring a bag full of snacks for this hour long hike.  I almost tried to talk them out of it, but I do like snacks.) 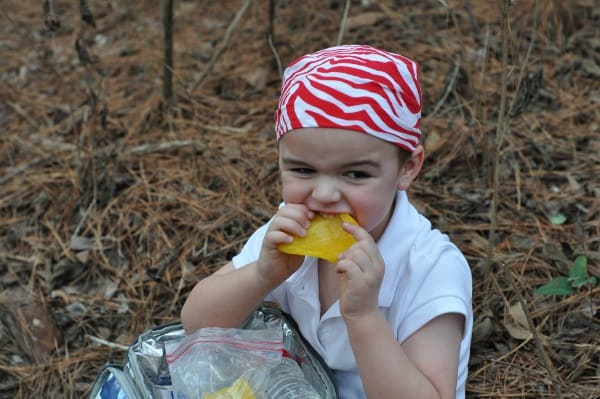 The green trail was well marked and was a little easier to follow than the blue trail.  The hike was not quite as adventurous (and there was no log bridge over water), but still a lot of fun.

Like the last trip, I suggest bringing the trail map on your phone or paper.  Also, since there is no viability from the street, I would bring another adult with you. 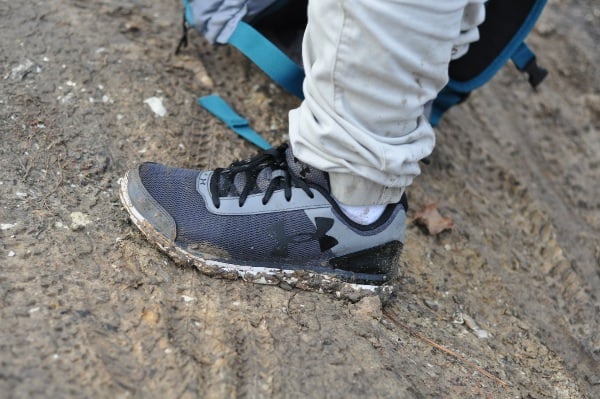 We parked close to the Memorial Park picnic area (for free, on the south side of the Memorial Drive).  Also, because of a past trip to Memorial Park (with broken car windows), we were certain to not leave any jackets or blankets or anything that looked valuable in the car.

Check out the pictures… and check out this hiking in the middle of Houston! 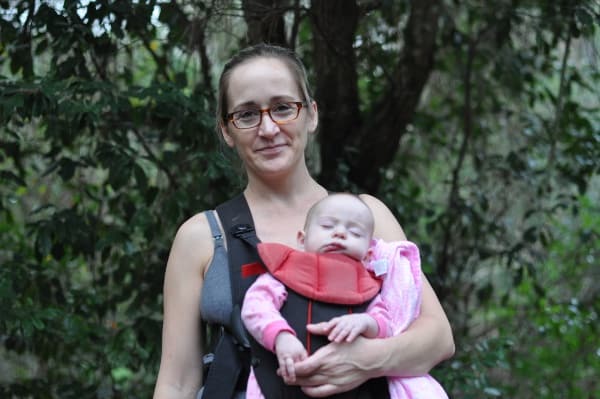 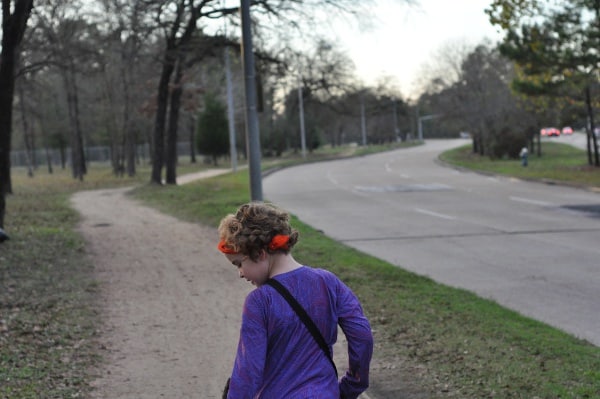 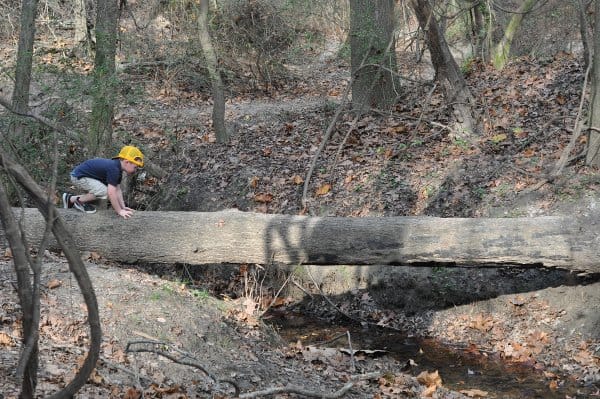 So I’ve done some camping (including at Lake Houston Wilderness Park), I’ve done some hiking and had lots of nature adventures. And now I’ve been hiking, right in the middle of Houston, and cannot believe the trail we found in Memorial Park.  Even my husband agreed that this trail was a whole lot more like hiking in upstate New York than in the middle of one of the nation’s biggest cities. 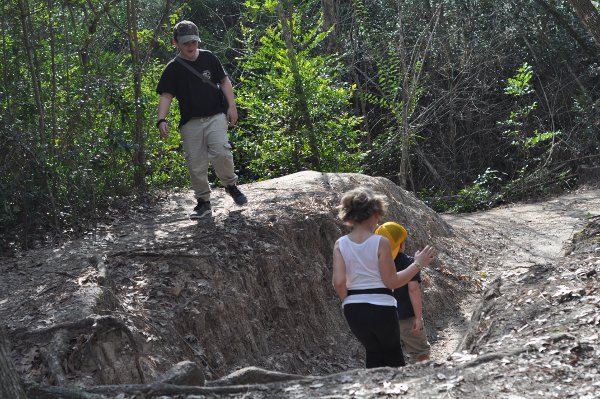 According to the map below, we picked one of the most difficult of the Memorial Park trails… the blue trail.  Unlike the wide jogging trail along Memorial Drive, this one follows Buffalo Bayou and goes up and down, through trees and over water on log bridges.

It was challenging, but easy enough that an adventurous 5, 7 and 9 year old could do it.  And I could do it with a baby strapped to my chest.  (But no way a stroller would work on this trail!) 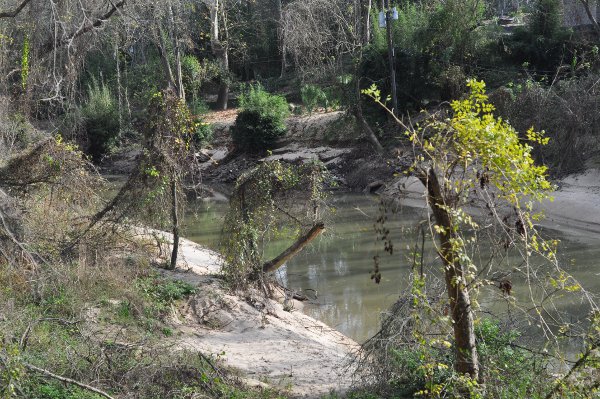 Now, I’m much better at urban exploring than nature exploring, but I was very happy to have another adult on this adventure.  There are a lot of trees and no visibility from the street… so I recommend having a second adult.

Also, have the map on your phone or on paper.  The many trails connect up and it’s easy too get off the blue trail.  (I’m pretty sure we spent time on the purple trail because we did not always find the color marker.)  Also, if the trail gets too tough, just turn back.  No need to wander all the way through. 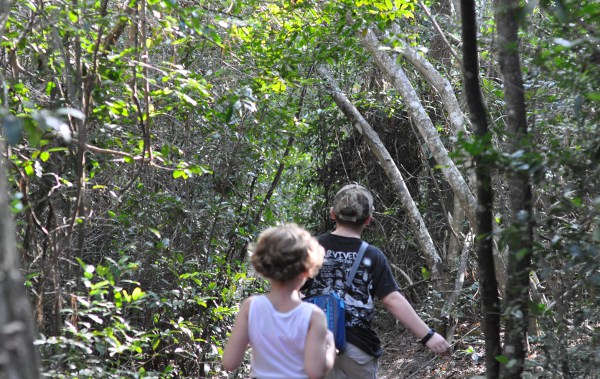 We parked close to the Memorial Park picnic area (for free, on the south side of the Memorial Drive).  Also, from the last trip to Memorial Park (with broken car windows), we were certain to not leave any jackets or blankets or anything that looked valuable in the car.

Also, the start of the trail has mountain bikes, so be watching.  Further in there are logs over the water and it gets more difficult, and we only saw hikers.

If you also want to try some “difficult” hiking in Houston, check out this trail! 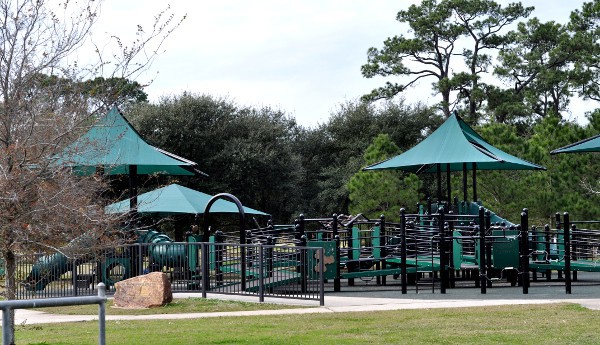 Memorial Park is a giant park with a super cool playground… and one problem that cost us $500 for visiting. 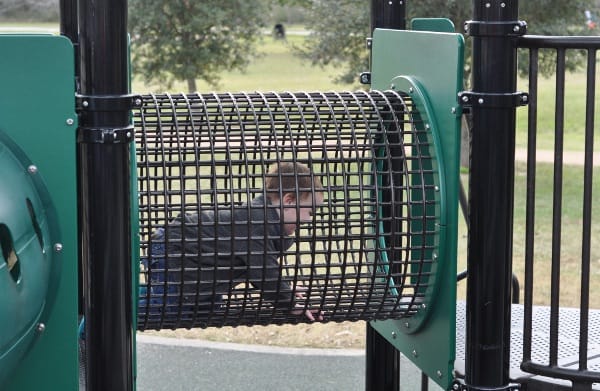 Okay, first with the good stuff. Memorial Park has a playground, tennis courts, fitness center, pool, golf course and jogging and biking trails.  Also, the Houston Arboretum is in Memorial Park, just down the street from the playground. 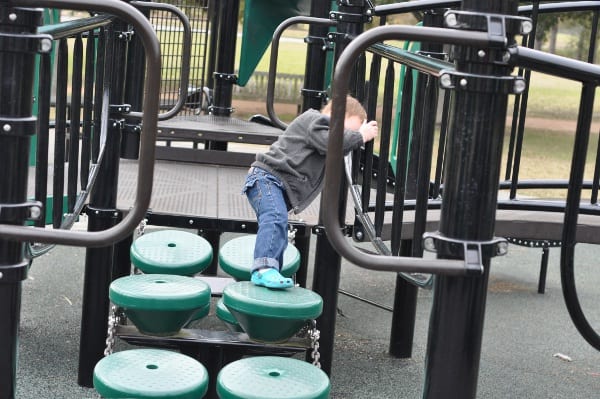 The play structure is really great, much like the West Gray Rec Center playground, but with even more unusual features! 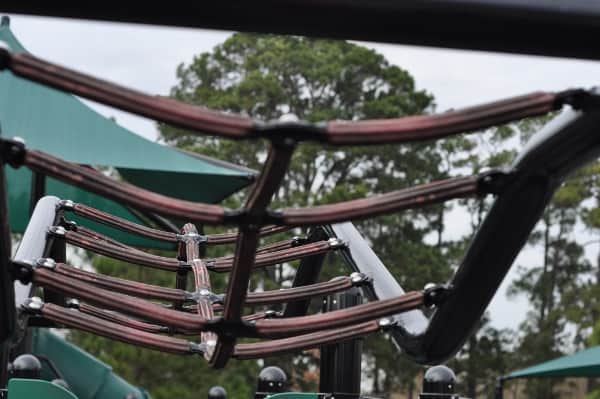 The Memorial playground has ramps all around, so wheelchairs (and strollers) and roll to the top.  If there is a playground catalog, I think this would be listed under “deluxe”. 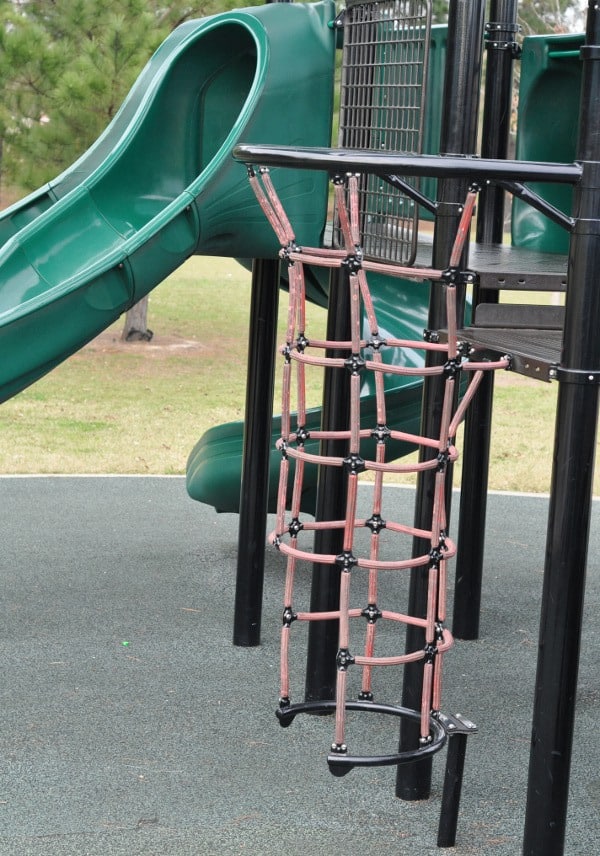 There are bridges, monkey bars, balance beams, music stations, roller slides, tube slides and regular slides.  In addition to this, this is a curving monkey bar, a springy balance beam bridge, a mesh crawling tube and a toad stool bridge.  It is really fantastic. 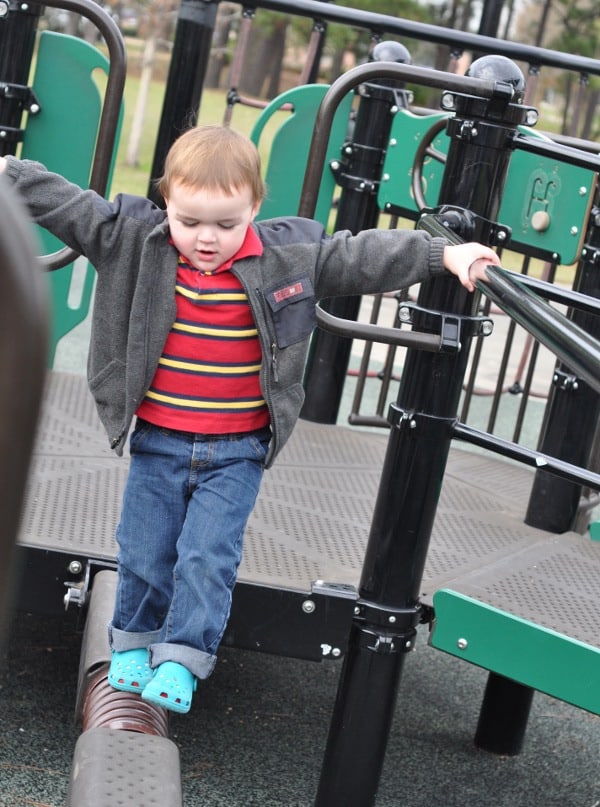 One of the issues is the that the play equipment is a little hard to watch from ground level.  If you have more than one kid running, it is very easy to lose sight of them.  This gets better if you just go to the top of the playground and watch like a lifeguard… but it’s not somewhere that is fenced in and you can chat with your friends while the kids play. 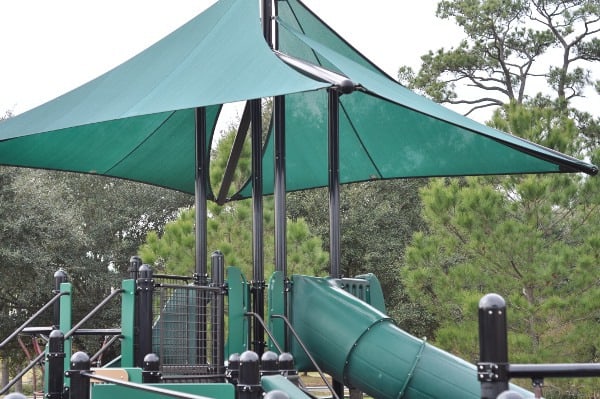 The bigger problem is the security.  I always say that I feel safer in busy urban environments because there are a lot of eyes watching over the street. 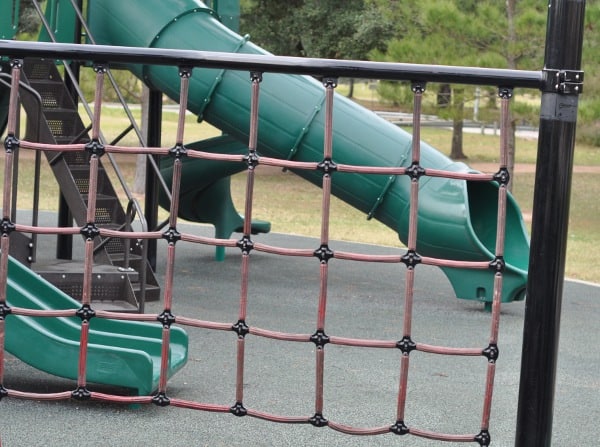 When my friend and I took the kids to Memorial Park on a weekday afternoon, we did not feel unsafe… there were joggers, there was a school in session next door and a few other kids were at the park.  In retrospect, no one was actually watching over the park… everyone was just passing through. 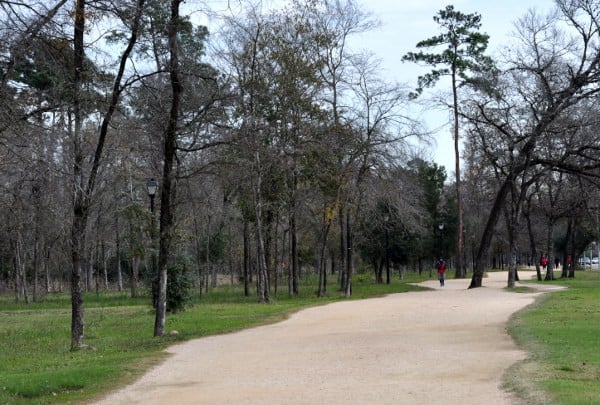 So, we played at the park and then loaded the kids in the strollers for a 3 mile run.  As we looped back around to our car, feeling proud of ourselves for doing more running than walking and talking, we saw the car. 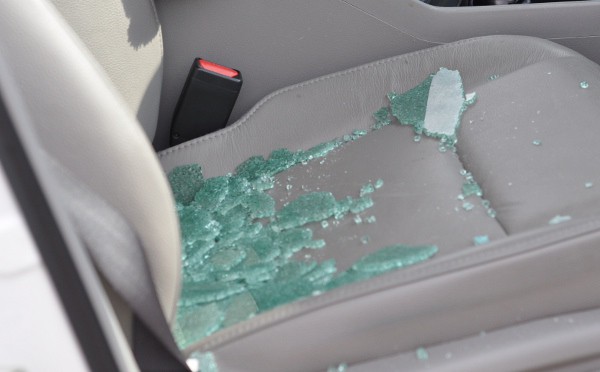 Windows were busted out, glass was all over the seats and nothing was taken.  The car only had car seats, a jacket and baby blanket.  I guess someone just wanted to be sure there was nothing better inside. 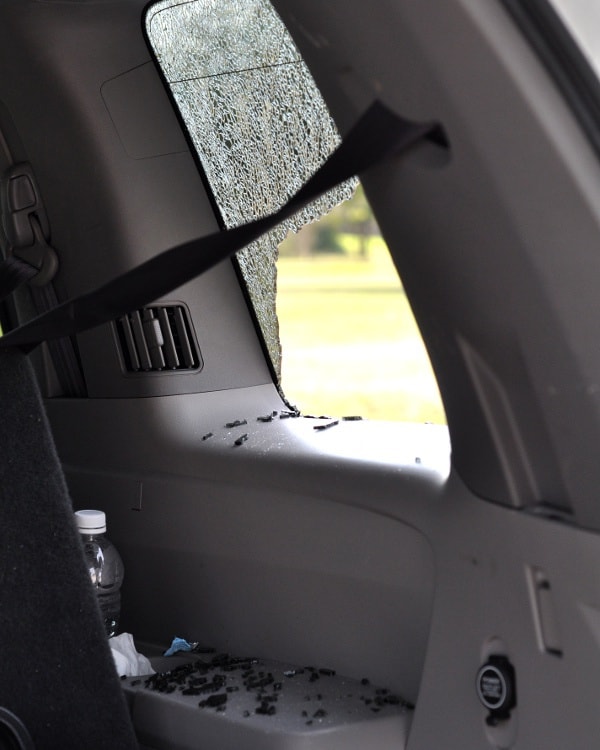 So, instead of just wrapping up an afternoon run, we rushed around sweeping out glass, picking up kids from school, calling for quotes, and spending nearly $500 on new windows.

My guess is that a lot of joggers leave purses in the car and a lot of the window smashing is lucrative for the thieves.  My guess is also that I will never park next to the playground again, unless I plan to stand guard over the car and the kids at playground.

I did notice many more cars parallel parked along the jogging trail, and this is probably a better spot… but there is still the problem of people passing through rather than watching over the activity.

So, that’s my story on Memorial Park’s playground.  A fantastic play structure… and our own auto glass all over the parking lot.

I don’t think every car the visits will have trouble, but be careful when you go.  Don’t leave your purse in your car… and don’t leave anything that someone might think is hiding your purse!