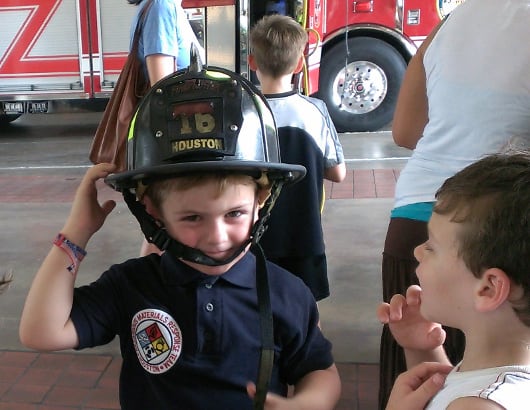 **Update:  This tour is FULL!  Don’t worry, we’ll set up more meet-ups this summer.  Maybe even some more Fire Station Tours!  SIGN UP FOR THE WAITLIST**

Calling all junior fire fighters! BigKidSmallCity is touring Fire Station 16 on June 13, 2014 at 10:00am. On last year’s tour we had the opportunity to meet the fire fighters, sit in the truck, spray the fire hose and tour the station!  Join us as we do it again this year!

Since this is an active station, keep in mind that: “If for any reason the assigned station is unable to participate due to an emergency response call, you may not receive advance notice of their absence. If the station receives an emergency response call during the scheduled activity, they are required to proceed to the emergency, but will make every effort to return upon completion.”

Last year the trucks left for a call and came right back. All the kids got to see the firefighters suit up and head out! Just be ready to have the outing not go perfectly as planned!

If you want to join us on June 13, 2014 at 10:00am, you must:
1. Fill out the form below.
2. Be one of the first 20 to respond. Spaces are very limited! You will receive an email saying you have a spot or you are on the waiting list.
3. If you get a spot, bring your little fire fighters to Fire Station 16 in Montrose (at Richmond and Dunlavy) on June 13, 2014 at 10:00am. The event is FREE. Feel free to bring a homemade card, some cookies or kitchenware* if you want to thank the fire fighters.
4. Make every effort to attend. Since spaces are so limited, we want as many little fire fighters to get a chance as possible. If you need to cancel, email me at Jill @ BigKidSmallCity.com.

*Last year the fire fighters said their kitchen was in need of pots, pans and gadgets!

The Tour is now full.  Join the wait list, and be notified of other BigKidSmallCity Meet Ups HERE. 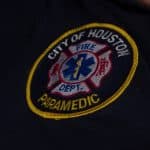 As you may know, one of our favorite places in Houston is the Houston Fire Museum. As you may also know, my 4 year old son is very serious about being a fireman.  He visits Houston Fire Stations and the Museum frequently, studies everything firemen do, and copies it all.

When he was 3 years old, he wore his full fireman Halloween costume to school every day.  (He wasn’t playing dress up.  He believed, deep in his heart, that he was a fireman.)  By the time he was 4, he had figured out that fireman actually wear navy pants and shirts, with patches, to work and only wear the full gear at fires.  With this change in thinking, we had a new wardrobe to acquire.   Lucky for us, we found the Houston Fire Museum. 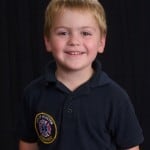 The Houston Fire Museum sells shirts, patches and more for the real deal Houston Fireman.  They also sell plenty for my junior fireman.

The Museum carries all the real Houston Fire Department patches and they can be purchased for $5.  We have just about every one, including fire department, paramedic, aircraft fire, haz mat…  I sew these onto navy polo shirts for Joe.  (I am not a seamstress, but having a fireman son leaves me little choice.  I have found that using clear nylon thread hides mistakes.) 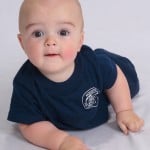 The Museum also carries Houston Fire Department t-shirts, for girls and boys, starting at 6 months.  Looking for an infant fireman costume?  They carry that too.  Plates, bowls, toys, books, DVDs?  They have it all.

Go check out the gear at the Houston Fire Museum.  Museum members get 10% off the gift shop. 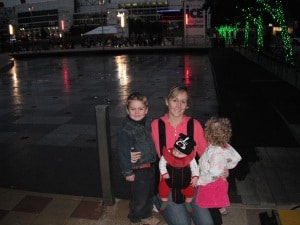 It’s the holiday season and there is a lot to do in Houston. You may want to checkout some of these events this weekend. 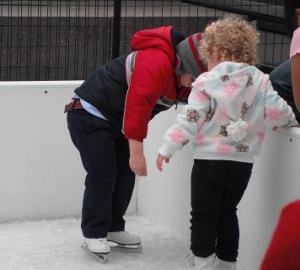 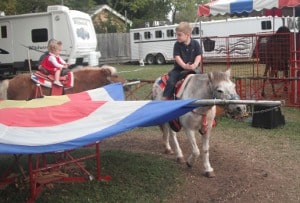 Be sure to check out Houston Family Magazine and Discovery Green for more Houston events.

Our Review: This was the event of the year! I might be biased, being the mother of 2 (maybe even 3) junior fire fighters, but this event was fantastic. 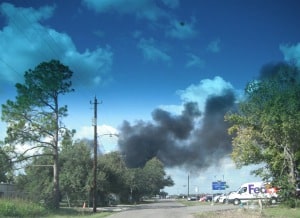 Fire Fest was held at the Houston Fire Department’s Val Jahnke Training Facility, just south of Hobby Airport. As we approached, we saw a huge cloud of black smoke and we knew we were headed in the right direction. We soon arrived and parking was easy (and just a little bumpy) in the grass lot across the street. 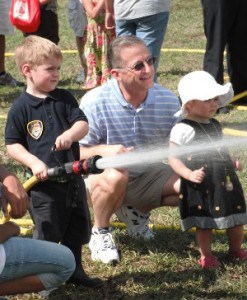 The event grounds were huge with plenty of space for people, tents, games and live fire rescue demonstrations. Right at the entrance was the kid’s play area with bouncy houses, obstacle courses, fire safety classes, face painting and much more. Joe’s favorite was using the real fire hose to shoot out the “flames” on the wooden house. 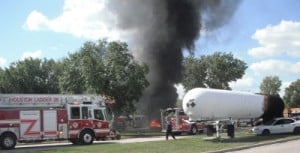 I was not sure I would be able to pull the kids away from the games, but soon we saw huge flames across the park. We ran over to see the Metro bus rescue. There was a huge fire, several fire trucks, and an announcer describing each truck’s role in the rescue and the steps required in this kind of event. 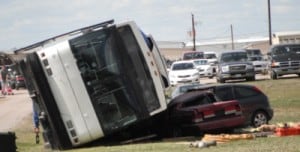 All over the event grounds there were piled up cars and buses and tankers. By the end of the day, there were huge fire rescue demonstrations on a diesel tank, bus, tanker truck and house. Joe also had the opportunity to help with the fire extinguisher demonstration. 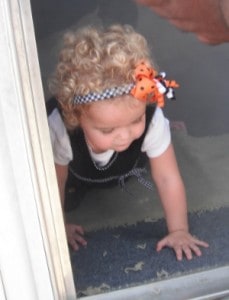 There were more free activities and events than we were able to do. One that we did do several times was the smoke filled house escape. There was a trailer, set up like a house, and filled with fake smoke. It was impossible to see and the kids had to crawl from the entrance to the exit. Brooke and Joe were fire drill champions.

We walked through the street of vendors, got a free snow cone from reliant, saw the line up of antique fire trucks and past the long line for BBQ. We even saw a fire fighter repel down the side of a building.

The event was full, but with so much to do, it was not crowded and there were very few lines.  Most things were free, and it wasn’t like a typical festival that drains your wallet.  The only things that would have made this better were cooler weather and fewer mosquitos. But I guess you can’t have the “Houston” Fire Fest if you’re not in Houston, so I’ll take it just the way it was.    We’ll be talking about Fire Fest 2011 for a long time.

Saturday October 29th, 2011 from 10am-4pm is Costume Day at the Houston Fire Museum! There will be FREE ADMISSION for anyone in costume. 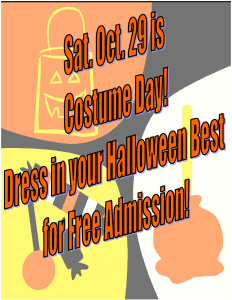 From the Houston Fire Museum:

There will be Fire Safety activities everyday from 11:00 AM to 11:30 AM:
Tales for Tikes: Arthur’s Fire Drill, by Marc Brown
Fire Truck Frame
The History of Fire Prevention Week
Creating Escape Plan for the family, “Moppet Manor”
Know the Sound of the Smoke Alarm
Call 9-1-1
Fire Fighter Finger Puppets
Make your own Fire Helmet and Badge 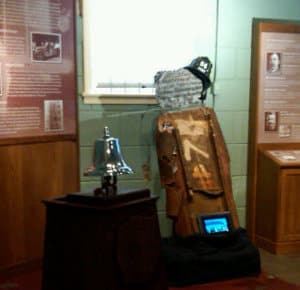 Houston Firefighters were gathered at the Houston Fire Museum today to remember the September 11 attacks. Members of Houston’s Honor Guard will be in New York this weekend to take part in special September 11 ceremonies.  KHOU and other news stations were on site.

If you are looking for a place to pay tribute, consider visiting the museum this week. 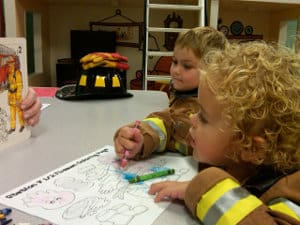 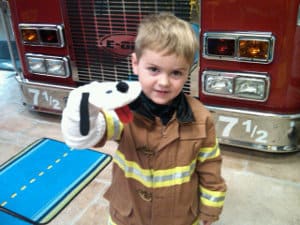 My kids really enjoy the museum and the classes. The class is for children 2 to 5 years old and includes group activities, role playing, videos and craft projects. Each week covers a new topic: My Friend the Firefighter, Get Low and Go, Stop! Drop! And Roll!, Safe for Play! Keep Away!, Sparky’s Hazard House and Meet a Firefighter.

My kids are not in to sports or music yet, but they love the Fire Museum and learning about firefighters. I recommend checking it out.

September is Grandparents Month at the Houston Fire Museum.

Seniors 65 and older get FREE admission to the Houston Fire Museum in September! Take our self-guided tour and learn the story of firefighting in Houston, visit the firefighter’s dorm room, locker room, and watch office. Don’t forget to bring the grandchildren and enjoy sharing stories in our Junior Firehouse.

We love the Houston Fire Museum. 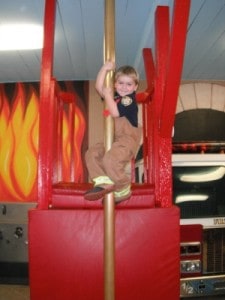 Tyke Tuesdays are back at the Houston Fire Museum.

· Six week session, attendance at all is not required

Tike Tuesdays utilizes the Play Safe! Be Safe! six week fire safety series that is designed for children ages 2 to 5. The play date teaches a multi-media fire safety program including group activities, role playing, videos, and craft projects. The fire safety concepts are: My Friend the Firefighter, Get Low and Go, Stop! Drop! And Roll!, Safe for Play! Keep Away!, Sparky’s Hazard House and Meet a Firefighter. Call and RSVP your spot today!