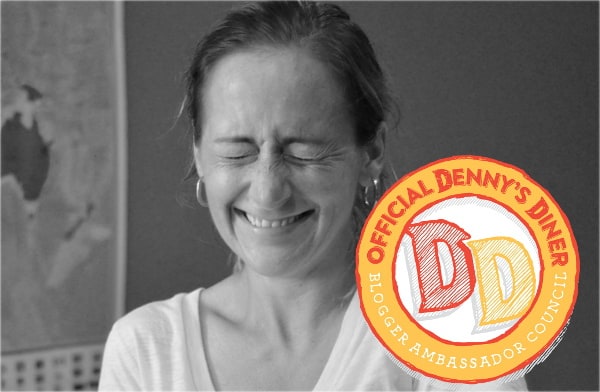 Take something boring, add some pumpkin, and suddenly you have a Fall treat that I can’t resist.

Last year I filled my freezer with pumpkin coffee grounds, just to keep the magic alive.  Really.  I did.  And this year my husband forbid it… said he could not take one more cup of pumpkin coffee.  (I think he’s lacking some Fall spirit.)

Since my freezer is no longer stocked, I’m on a mission to fill myself with as much Fall before the season disappears.

About the time I was plotting out my pumpkin plan, I was at a Denny’s Ambassador’s meeting.  Here they told me about the restaurant and blah, blah, something, something…  and the leader mentioned that her friend diets all year, just to eat and drink “pumpkin everything” in the Fall.

This got my attention.

Denny’s serves Pumpkin Pancakes and Pumpkin Coffee all day.  And I know it’s not Pumpkin, but they also have Gingerbread French Toast, which seems just as perfect for indulging in Fall.

So, guess where I’m spending October and November?  At the restaurant that I once said only old men eat at.

Last week I sat at a Houston Denny’s and tried to lie-straight-faced to those that had hired me as a Denny’s Ambassador.  Their questions was, “What came to mind when I thought of Denny’s?”.

I tried to bite my cheeks and keep my face straight as I said, “Pancakes”.  But it wasn’t long until I had the same crooked smile you can see on my kid’s faces when they claim they brushed their teeth.

I don’t think of pancakes.  I don’t even think bacon.  I think of the dingy Denny’s from my childhood, with old men at the counter and waitresses that obviously wanted to go home.

And because my lying-face looked ridiculous, I just blurted it out, “I think boring.  I think of a dingy old diner where old men drink coffee and waitresses scowl.”  And immediately I decided that drinking my tea would have been a better solution for fixing my lying-face.

Fortunately another Ambassador (perhaps with better manners or more practice lying) spoke up and said only nice things about the establishment.

The fearless meeting leader then came back to me and he bravely asked what was dingy about the Denny’s we were at?  Well…

The Denny’s we visited on I10 was actually quite nice.  When I walked in, I was greeted enthusiastically by 3 employees and noticed the restaurant was very Chili’s-esque with hardwood floors, a big modern Texas mural and power plugs at the booths.  The waiters were enthusiastic and it was quite enjoyable to be there.

But still, this isn’t what came to mind when I thought Denny’s.  I thought of the Denny’s from the 1980s that my mom didn’t want to visit.

Apparently I need to re-calibrate my brain a little, because the Denny’s we visited wasn’t anything like the 1980s Denny’s.  In fact, it’s somewhere I’d like to visit when I’m not at the Ambassador’s meeting.  Especially on Tuesdays when kids eat free and my entire family can dine for just a few dollars.

So, not only did the meeting start with a crooked smiled, but it also ended with one.  I get that same ridiculous looking face when I’m wrong about things.

This time I straightened it out by sipping my tea and eating strawberry pancake hush-puppies. 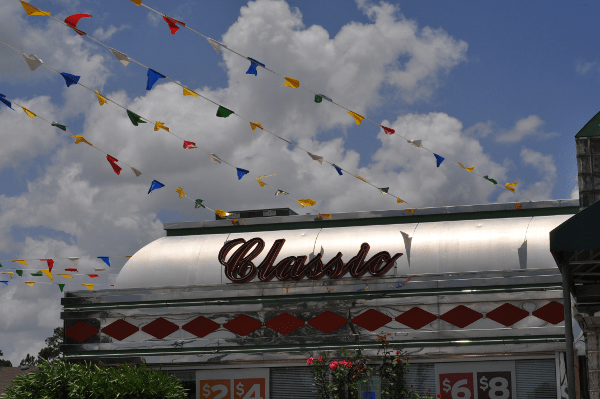 I am pleased to tell you I have accepted a position as Denny’s Blogger Ambassador!  This is funny, because as a kid, my mom refused to go to any restaurant that resembled a diner. It was only when she was away that my dad and I would sneak off to places like Denny’s.

It has been a longtime family joke that my mom (also one of my favorite people in the entire world) was too snooty* for Denny’s. Every time we would head out to eat, for at least the last 30 years, we’d bring this up. Still, despite our teasing, she refused to go.

I never had any luck changing her mind, but it just took my own kids 30 seconds of batting their eyelashes and smiling sweetly to get their grandma to Denny’s. 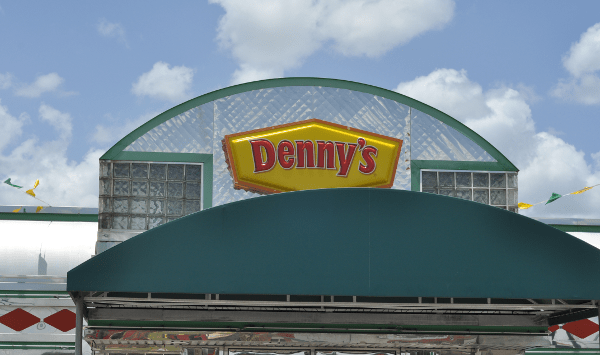 A few Denny’s locations around Houston are in the shiny silver old-time diner building, complete with jukeboxes and bar stools. My kids got their grandma to this spot on Louetta and did not know quite what they had accomplished. I didn’t bother to explain it, because they were busy figuring out how the jukebox worked.

We sat at a back table, under the old time diner photos, and the kids reviewed their menus while my dad and I smiled at my mom. The kids menus have pictures and descriptions for the kids to pick out their meal. They either pick a breakfast ($2.99 each) or they pick one lunch item with one side ($3.29 each). It was so easy that the kids did not need my help and I could continue to watch my mom. 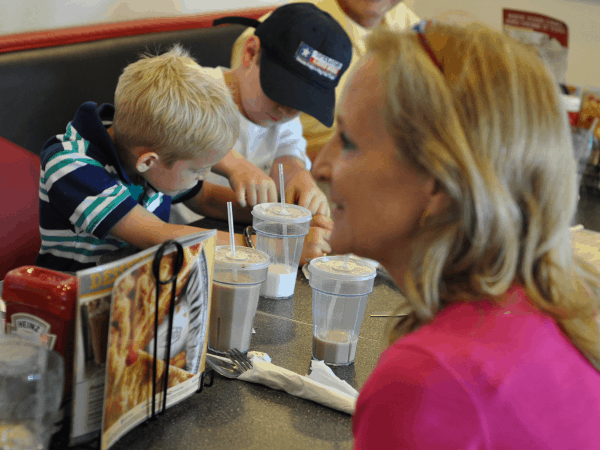 She was busy ignoring me and helping to color National Geographic Kid menus and reading weird facts to the kids.  Did you know that a dolphin’s eyeballs move independently of each other?  They can look up and down, at the same time! I am pretty sure she giggled along with the kids, which made me suspect that she was enjoying herself.