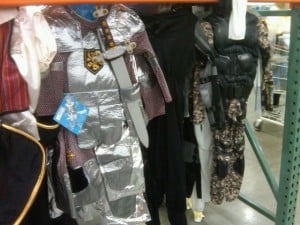 The Galleria Costco on Richmond has Halloween costumes available now!  Each year my son waits for these to arrive so he can decide what *must* be.  Not only does he wear these costumes for Halloween, but he wears them all year long. 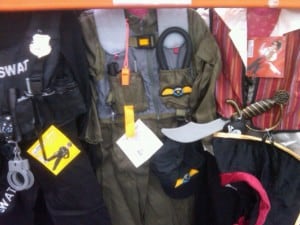 At Costco, the boy costumes come in size 3-4 and 5-6.  I spotted a Firefighter, SWAT Officer, Military Pilot, Pirate, Knight and Military Como  costume for $23.99. 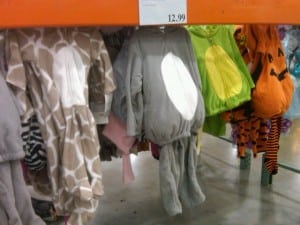 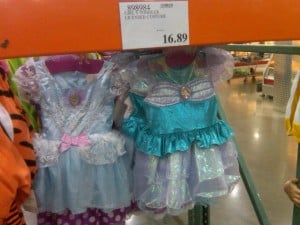 The selection is smaller, but for size 2T and up there are toddler princess costumes for $16.89.  I spotted Cinderella, Ariel and Minnie Mouse (I know, I know, Minnie is not a princess.)  These are really just cute dresses with the princess (or Minnie) on a “jewel” on the chest.

Over the last few years, we’ve collected the brown and black Fireman costumes, the SWAT costume, the Astronaut costume (which I did not see yet for 2012) and now the Pilot costume. 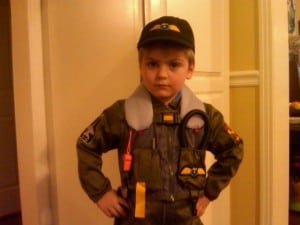 The quality seems fine on all of them, but the fireman costume is the best value. The fireman costume comes with overalls, a jacket and a hat. The material is solid and not that thin nylon costume material. When Joe was 3, he wore this full outfit to preschool every single day. I hand washed it more times than I can count.  At some point the reflective strips started to fall off, but the costume is still in one piece 3 years later. 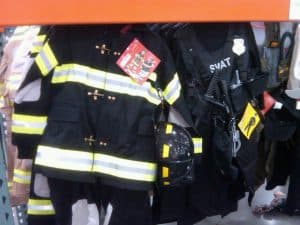 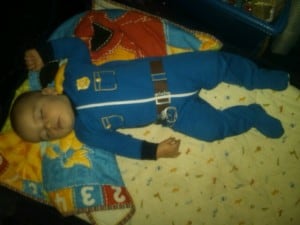 I’m not really sure if James wants to be a police man or fireman, but his big brother does, so he gets lots of gear.  Right now you can find police man pajamas at Costco (along with cowboy and other cute PJs) for about $10.  I believe the pajamas go up to size 3T.  (Do know that they seem to run small.  My 10 month old is fitting into the 18 month size.)

We saw them at the Galleria Costco.  Call your local store to see what they have. 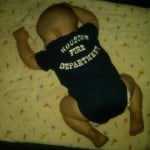 Are you looking for baby fireman gear instead?  Check the Houston Fire Museum.  This onesie is approximately $15 and the money goes towards the museum. 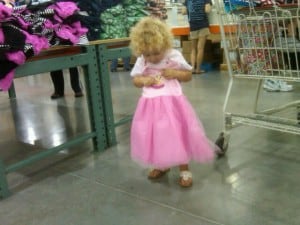 The Galleria Costco has some really cute ballerina and princess dresses, sizes 2T and up. Some have a long fancy skirts and some have short tutus.  All are adored by my 2 year old.

Brooke got this ballerina dress, wore it all day, and is currently wearing it in bed.  It is that fantastic.

At the Houston Galleria location, the price was $12.99.

The Galleria Costco has Halloween Costumes in stock! 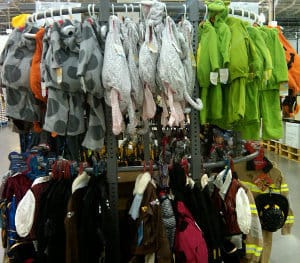 Last year we purchased the fireman outfit, which comes with overalls, jacket and hat. My son (Fireman Joe) wore it just about every day to preschool and it is still in good shape. I am very impressed with the quality, and it was on $24.00. (I’ve seen the same uniform for $70.)

There are arguments that Costco is not always the best deal in town.   Sure, if you buy in bulk, but waste half the food, you are not getting a good deal.  And, if you pay for the membership, but do not shop at the store often, you are wasting money. And, of course, if you cut coupons and pair up sales with store and manufacturer coupons, you can often get things cheaper than at Costco.   Still, I love Costco. 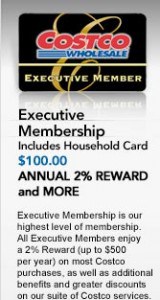 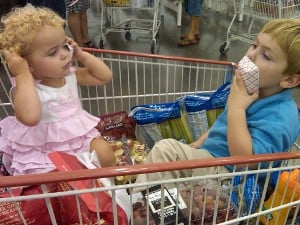 I love Costco because it is easy to get a good deal. It may not be a fantastic deal, but you know you are not being ripped off.   I like the price of gas.   I also like the food court.   My kids love the $1.50 hotdog and drink and I’m a fan of the frozen yogurt.   We also like the samples around every corner.  Still, the best part is probably the easy returns.

Costco will return most anything, for most any reason.  My favorite is the electronics return policy.  Since I have young kids, I am constantly taking pictures.  My trusty old digital camera was not working well, so I bought a new one at Costco.  About a week later, I was walking near a pool, and yes, I got tripped up and fell in.  With my camera.  (Totally not my fault, and I’m sticking to that story.)  I was sick to have ruined my brand new camera.  On a tip, I went back to Costco with the camera.  I told them exactly what happened, with nothing hidden.  Since it was within the return timeline, they gave me my money back.  (I then went and bought a waterproof, shock proof camera at Costco.)

More than this, I’ve learned that you can score some spectacular deals at Costco.  If you want to learn how, check out this article by Len Rapoport.

The key points are:

1.  Look for items that end in 97¢.  Regularly priced items usually end in 99¢.  97¢ generally indicates that an item is being cleared out.

2.  Look for items ending in other odd prices (ie 79¢ or 49¢).  These are generally special deals from the manufacturer and are priced very competitively.

3.  Look for the “*” in the upper right hand corner of the price sign.  It usually means the item is not being reordered.  It does not always mean it is priced to clear out, but it does mean that if you want it, you should buy it before it’s gone.

4.  Look in the coupon book for discounts and look for instant rebates on the price sign.